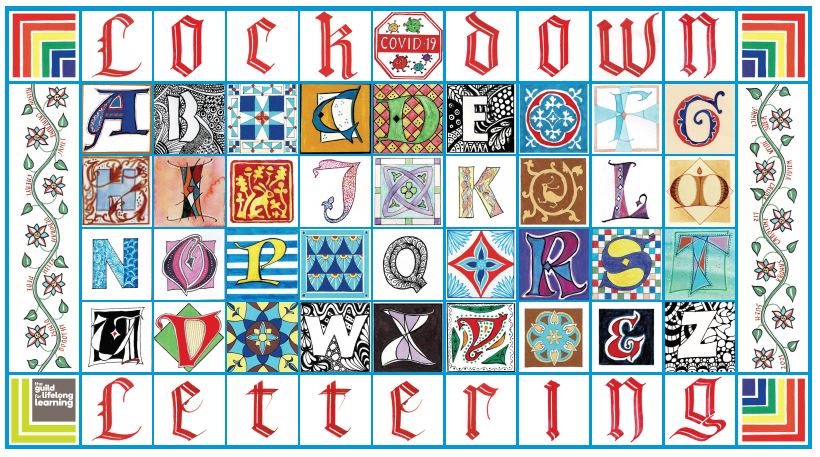 Various calligraphy groups I know of have produced collaborative projects such as calendars and tea towels. Although I have flirted with this idea, the time just never seemed quite right. And then the pandemic arrived…

During the first lockdown, we turned to Zoom for our sessions, then in the autumn of 2020 we were allowed back to the Guild along with our masks, sanitiser, and social distancing.

I showed my classes a tea towel I had bought at a calligraphy event a few years ago, and suggested we do something similar. There was never a Grand Plan, except that eventually it was hoped the whole would be greater than the sum of its parts, and the idea continued to develop with input from all the participants. Of course, being calligraphers, we are in our element messing about with letters and the alphabet has 26 of them. The grid of 6 by 11 squares was chosen quite early on, but an alphabet of 26 still leaves another 40 spaces… When we needed an extra letter, the ampersand (&) came in useful.

Three designs for decorated capital letters were used, one traditional and two more contemporary, and all three were suitable for the various levels of experience. Apart from a 55mm template for each letter, nothing else was prescriptive, students could use whatever colours they liked (or had to hand). There turned out to be a predominance of blue, which led to the blue borders.

I had the grid mapped out on a large piece of mountboard and used scans of the artwork to arrive at the final arrangement. Changing one element led to the disruption of others.

A medieval border filled the side rows of squares, providing the perfect place for everyone’s names and the new Guild for Lifelong Learning logo fitted one corner.

There was much debate about what theme the tea towel could have, whether it should be aimed at, say, Christmas, or something less limiting, or no theme at all. As everyone had been involved in producing the letters and design throughout almost a year of the pandemic, both in and out of lockdown, it seemed fitting to mark this experience. Various phrases were tried until ‘Lockdown Lettering’ was found to be the best fit for the remaining squares in the top and bottom rows and the three NHS rainbows joined the other artwork on the mountboard in the remaining three corners.

Now it was time to call in a professional to produce a suitable file for the printers, two hours work for her rather than untold misery for someone else!

We all feel that the finished work bears witness to a frightening and uncertain time that none of us can imagine we will ever forget. But even during such a period there are untold rewards to be found in creatively working in a group making a small piece of history.